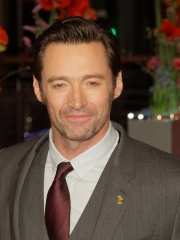 Hugh Michael Jackman (born 12 October 1968) is an Australian actor. He landed his breakthrough role as Wolverine / Logan in the X-Men film series (2000–2017), a tenure that earned him the Guinness World Record for "longest career as a live-action Marvel superhero". Jackman has headlined several films during his career, including the romantic comedy Kate & Leopold (2001), the action horror Van Helsing (2004), the drama The Prestige (2006), the fantasy drama The Fountain (2006), the animated film Flushed Away (2006), the period romance Australia (2008), the epic musical Les Misérables (2012), Rise of the Guardians (2012), the thriller Prisoners (2013), Missing Link (2019), and the musical The Greatest Showman (2017). Read more on Wikipedia

Hugh Jackman is most famous for his role as Wolverine in the X-Men movies.

Among people born in 1968, Hugh Jackman ranks 6. Before him are Will Smith, Paolo Maldini, Celine Dion, Daniel Craig, and Felipe VI of Spain. After him are Kolinda Grabar-Kitarović, Naomi Watts, Guy Ritchie, Frederik, Crown Prince of Denmark, Mika Häkkinen, and Didier Deschamps.