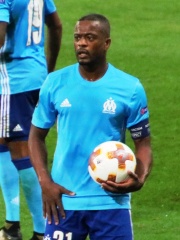 Patrice Latyr Evra (French pronunciation: ​[pa.tʁis e.vʁa]; born 15 May 1981) is a French football coach and former professional player. Originally a forward, he primarily played as a left-back. Evra, whom manager Sir Alex Ferguson praised for his leadership, also describing him as one of the best left-backs in Europe, served as captain for both Manchester United and the France national team.The son of a diplomat, Evra was born in Senegal and arrived in Europe when he was a year old. Read more on Wikipedia

Since 2007, the English Wikipedia page of Patrice Evra has received more than 3,407,941 page views. His biography is available in 62 different languages on Wikipedia making him the 567th most popular soccer player.