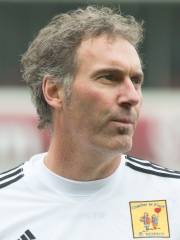 Laurent Robert Blanc (born 19 November 1965) is a French professional football manager and former player who played as a centre-back. He has the nickname Le Président, which was given to him following his stint at Marseille in tribute to his leadership skills.Blanc played professional football for numerous clubs, including Montpellier, Napoli, Barcelona, Marseille, Inter Milan and Manchester United, often operating in the sweeper position. He is also a former French international, earning 97 caps and scoring 16 international goals. Read more on Wikipedia

Laurent Blanc is most famous for being the manager of the French national football team, which he led to victory in the 1998 World Cup.