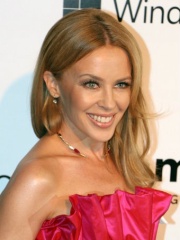 Kylie Ann Minogue (; born 28 May 1968), also known mononymously as Kylie, is an Australian singer, songwriter and actress. She is the highest-selling female Australian artist of all time, having sold over 80 million records worldwide. She has been recognised for reinventing herself in music and fashion, for which she is referred to by the European press as the "Princess of Pop" and a style icon. Read more on Wikipedia

Kylie Minogue is a pop singer who has been in the industry for over 30 years. She is most famous for her songs "Can't Get You Out of My Head" and "I Should Be So Lucky."

Among singers, Kylie Minogue ranks 212 out of 3,528. Before her are Kenny Rogers, Tom Morello, Dionne Warwick, Rob Halford, Valery Leontiev, and Courtney Love. After her are Dave Gahan, Dua Lipa, Sarah Brightman, Milva, Ricky Martin, and The Singing Nun.