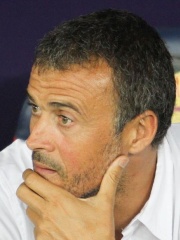 Luis Enrique Martínez García (Spanish pronunciation: [lwis enˈrike]; born 8 May 1970), known as Luis Enrique, is a Spanish former professional footballer and manager, currently in charge of the Spain national team. A versatile player with good technique, he was capable of playing in several different positions, but usually played as a midfielder or forward, and was also noted for his temperament and stamina. Starting in 1991 and ending in 2004, he represented both Real Madrid and Barcelona with equal individual and team success, appearing in more than 500 official games and scoring more than 100 goals. Read more on Wikipedia

Since 2007, the English Wikipedia page of Luis Enrique has received more than 277,322 page views. His biography is available in 52 different languages on Wikipedia making him the 349th most popular soccer player.