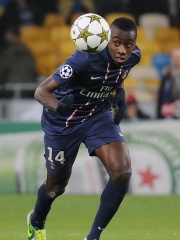 Blaise Matuidi (French pronunciation: ​[blɛz matɥidi]; born 9 April 1987) is a French professional footballer who plays as a midfielder for Serie A club Juventus and the France national team. Matuidi began his football career playing for amateur clubs in the Île-de-France region, such as US Fontenay-sous-Bois and CO Vincennois. In 1999, he was selected to attend the prestigious Clairefontaine academy. Read more on Wikipedia

Since 2007, the English Wikipedia page of Blaise Matuidi has received more than 2,094,353 page views. His biography is available in 51 different languages on Wikipedia making him the 1,216th most popular soccer player.