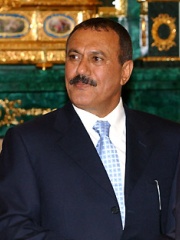 Ali Abdullah Saleh al-Ahmar (Arabic: علي عبدالله صالح الأحمر , ʿAlī ʿAbdullāh Ṣāliḥ al-Aḥmar; 21 March 1947 – 4 December 2017) was a Yemeni politician who served as the first President of Yemen, from Yemeni unification on 22 May 1990 to his resignation on 25 February 2012, following the Yemeni Revolution. Previously, he had served as President of the Yemen Arab Republic, or North Yemen, from July 1978 to 22 May 1990, after the assassination of President Ahmad al-Ghashmi.Saleh developed deeper ties with Western powers, especially the United States, in the War on Terror. Islamic terrorism may have been used and encouraged by Ali Abdullah Saleh to win Western support and for disruptive politically motivated attacks. Read more on Wikipedia

Ali Abdullah Saleh was the president of Yemen for more than 30 years. He is most famous for his role in the Yemeni Civil War.

Among politicians, Ali Abdullah Saleh ranks 1,763 out of 15,577. Before him are Simeon Saxe-Coburg-Gotha, Conrad of Montferrat, Gheorghe Gheorghiu-Dej, Ferdinand Karl, Archduke of Austria-Este, Uesugi Kenshin, and Ladislaus IV of Hungary. After him are Conradin, Chilperic II, Alaeddin Pasha, Bao Zheng, Kim Jong-un, and Al-Musta'sim.