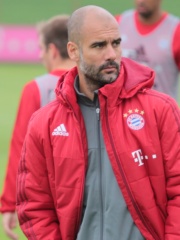 Josep "Pep" Guardiola Sala (Catalan pronunciation: [ʒuˈzɛb ɡwəɾðiˈɔlə]; born 18 January 1971) is a Spanish professional football manager and former player, who is the current manager of Premier League club Manchester City. He is considered one of the greatest managers of all time and holds the records for the most consecutive league games won in La Liga, the Bundesliga and the Premier League.Guardiola was a defensive midfielder who usually played in a deep-lying playmaker's role. He spent the majority of his career with Barcelona, forming a part of Johan Cruyff's Dream Team that won the club's first European Cup in 1992, and four successive Spanish league titles from 1991 to 1994. Read more on Wikipedia

Pep Guardiola is most famous for being the manager of Manchester City Football Club. He is also the most successful manager in the history of FC Barcelona, with 14 titles.

Among COACHES In Spain