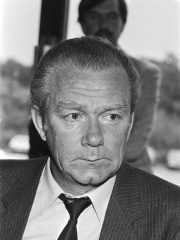 Valeriy Vasylyovych Lobanovskyi (Ukrainian: Вале́рій Васи́льович Лобано́вський, pronounced [wɐˈlɛr⁽ʲ⁾ij lobɐˈnɔu̯sʲkɪj]; Russian: Вале́рий Васи́льевич Лобано́вский; 6 January 1939 – 13 May 2002) was а Ukrainian football player and manager. He was Master of Sports of the USSR, Distinguished Coach of the USSR, and a laureate of the UEFA Order of Merit in Ruby (2002) and FIFA Order of Merit, the highest honour awarded by FIFA. In 2002 he was awarded the Hero of Ukraine award (posthumously), his nation's highest honour, for his contribution to Ukrainian football. In 2008, Lobanovskyi was ranked 6th in Inter's list of the 100 Greatest Ukrainians following a nationwide poll that saw around 2.5 million people casting their votes.Lobanovskyi is most famous for his spells managing FC Dynamo Kyiv and the USSR national football team. Read more on Wikipedia

Valeriy Lobanovskyi is most famous for being the manager of Dynamo Kyiv, which he led to 13 Ukrainian league titles, six Soviet league titles, and three European Cup titles.

Among COACHES In Ukraine

Among coaches born in Ukraine, Valeriy Lobanovskyi ranks 1. After him are Anatoliy Byshovets (1946), Volodymyr Bezsonov (1958), and Sergei Semak (1976).