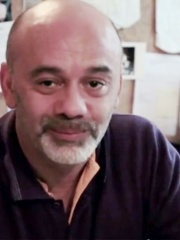 Christian Louboutin (French: [kʁis.tjɑ̃ lu.bu.tɛ̃]; born 7 January 1963) is a French fashion designer whose high-end stiletto footwear incorporates shiny, red-lacquered soles that have become his signature. Initially a freelance designer for fashion houses, he started his own shoe salon in Paris, with his shoes finding favor with celebrity clientele. He has partnered with other organizations for creative projects including limited edition pieces, gallery exhibits, and a custom bar. Read more on Wikipedia

Since 2007, the English Wikipedia page of Christian Louboutin has received more than 2,233,787 page views. His biography is available in 29 different languages on Wikipedia making him the 28th most popular fashion designer.

Among FASHION DESIGNERS In France