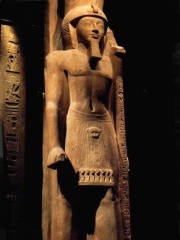 Seti II (or Sethos II) was the fifth pharaoh of the Nineteenth Dynasty of Egypt and reigned from c. 1203 BC to 1197 BC. His throne name, Userkheperure Setepenre, means "Powerful are the manifestations of Re, the chosen one of Re." He was the son of Merneptah and Isetnofret II and sat on the throne during a period known for dynastic intrigue and short reigns, and his rule was no different. Read more on Wikipedia

Since 2007, the English Wikipedia page of Seti II has received more than 273,654 page views. His biography is available in 33 different languages on Wikipedia making him the 1,234th most popular politician.

Among politicians, Seti II ranks 1,228 out of 14,801. Before him are Abū Lahab, Frederick III, Elector of Saxony, Ludwig I of Bavaria, Berengar I of Italy, Eric XIV of Sweden, and Eric Bloodaxe. After him are Crazy Horse, Millard Fillmore, Chulalongkorn, Eleftherios Venizelos, Ur-Nammu, and Sariputta.