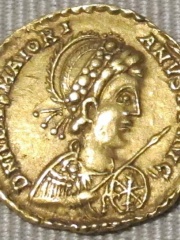 Majorian (Latin: Julius Valerius Maiorianus; c. 420 – 7 August 461) was the western Roman emperor from 457 to 461. A prominent general of the Roman army, Majorian deposed Emperor Avitus in 457 and succeeded him. Read more on Wikipedia

Since 2007, the English Wikipedia page of Majorian has received more than 466,263 page views. His biography is available in 50 different languages on Wikipedia. Majorian is the 1,248th most popular politician (down from 1,144th in 2019).

Majorian was the last emperor of the Western Roman Empire, reigning from 457 to 461. Majorian is most famous for his victory over the Visigoths in 461, which prevented them from invading Italy.

Page views of Majorians by language

Among politicians, Majorian ranks 1,248 out of 15,710. Before him are Anthemius, Xerxes II of Persia, Chulalongkorn, James Buchanan, Peter I of Portugal, and Haakon IV of Norway. After him are Esarhaddon, Henry the Lion, Meritaten, Feodor II of Russia, Ur-Nammu, and Neoptolemus.