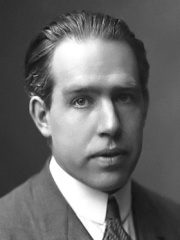 Niels Henrik David Bohr (Danish: [ˈne̝ls ˈpoɐ̯ˀ]; 7 October 1885 – 18 November 1962) was a Danish physicist who made foundational contributions to understanding atomic structure and quantum theory, for which he received the Nobel Prize in Physics in 1922. Bohr was also a philosopher and a promoter of scientific research. Bohr developed the Bohr model of the atom, in which he proposed that energy levels of electrons are discrete and that the electrons revolve in stable orbits around the atomic nucleus but can jump from one energy level (or orbit) to another. Read more on Wikipedia

Since 2007, the English Wikipedia page of Niels Bohr has received more than 3,853,070 page views. His biography is available in 127 different languages on Wikipedia (up from 124 in 2019). Niels Bohr is the 9th most popular physicist (down from 7th in 2019), the 2nd most popular biography from Denmark (up from 3rd in 2019) and the most popular Danish Physicist.

Among PHYSICISTS In Denmark