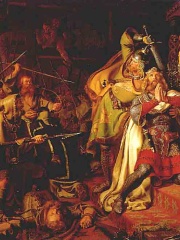 Canute IV (c. 1042 – 10 July 1086), later known as Canute the Holy (Danish: Knud IV den Hellige) or Saint Canute (Sankt Knud), was King of Denmark from 1080 until 1086. Canute was an ambitious king who sought to strengthen the Danish monarchy, devotedly supported the Roman Catholic Church, and had designs on the English throne. Slain by rebels in 1086, he was the first Danish king to be canonized. Read more on Wikipedia

Canute IV is most famous for his failed attempt to stop the tide from coming in.

Page views of Canute IV of Denmarks by language

Among politicians, Canute IV of Denmark ranks 1,877 out of 15,577. Before him are Britannicus, Félix Faure, Carinus, Anastasia Romanovna, Robert, Count of Clermont, and François Ravaillac. After him are Nicholas I of Montenegro, Ibrahim Rugova, Martin of Aragon, Aşub Sultan, Kęstutis, and Thomas Bach.