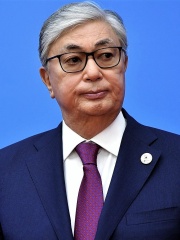 Kassym-Jomart Kemeluly Tokayev (Kazakh: Қасым-Жомарт Кемелұлы Тоқаев, romanized: Qasym-Jomart Kemelūly Toqaev [qɑˈsɯm ʑɔˈmɑrt keˌmelʊˈɫɯ tɔˈqɑjɪf] born 17 May 1953) is a Kazakh politician and diplomat who is currently serving as the President of Kazakhstan since 12 June 2019. Shortly before that, he served as acting president after the resignation of Nursultan Nazarbayev, who previously held the presidential post for nearly three decades.Born in Alma-Ata (now Almaty), Tokayev attended the Moscow State Institute of International Relations where after graduating in 1975, he worked as a diplomat in Singapore and China. After the dissolution of the Soviet Union, Tokayev became the Deputy Foreign Minister of a newly independent Kazakhstan in 1992, where he was involved on the issues of nuclear disarmament within the former Soviet republics. Read more on Wikipedia

Kassym-Jomart Tokayev is most famous for being the President of Kyrgyzstan from October 2006 to June 2007.

Among politicians, Kassym-Jomart Tokayev ranks 1,106 out of 15,577. Before her are Charles XV of Sweden, Isaac II Angelos, Rani of Jhansi, Yu the Great, James Buchanan, and Thutmose IV. After her are Stephen III of Moldavia, Constantine V, John McCain, Gustáv Husák, Chongzhen Emperor, and Probus.