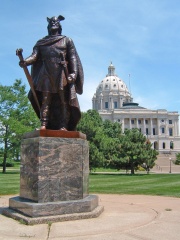 Leif Erikson, Leiv Eiriksson or Leif Ericson (c. 970 – c. 1020) was a Norse explorer from Iceland. He is thought to be the first known European to have set foot on continental North America (excluding Greenland), approximately half a millennium before Christopher Columbus. According to the sagas of Icelanders, he established a Norse settlement at Vinland, which is usually interpreted as being coastal North America. Read more on Wikipedia

Since 2007, the English Wikipedia page of Leif Erikson has received more than 3,109,740 page views. His biography is available in 87 different languages on Wikipedia making him the 17th most popular explorer.

Among explorers, Leif Erikson ranks 17 out of 367. Before him are Zheng He, Francis Drake, Francisco Pizarro, Fridtjof Nansen, Prince Henry the Navigator, and Jacques Cartier. After him are David Livingstone, Jacques Cousteau, Abel Tasman, Xuanzang, Erik the Red, and Pedro Álvares Cabral.

Among EXPLORERS In Iceland

Among explorers born in Iceland, Leif Erikson ranks 1. After him are Bjarni Herjólfsson (966).