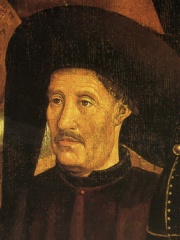 Dom Henrique of Portugal, Duke of Viseu (4 March 1394 – 13 November 1460), better known as Prince Henry the Navigator (Portuguese: Infante Dom Henrique, o Navegador), was a central figure in the early days of the Portuguese Empire and in the 15th-century European maritime discoveries and maritime expansion. Through his administrative direction, he is regarded as the main initiator of what would be known as the Age of Discovery. Henry was the fourth child of the Portuguese King John I, who founded the House of Aviz.After procuring the new caravel ship, Henry was responsible for the early development of Portuguese exploration and maritime trade with other continents through the systematic exploration of Western Africa, the islands of the Atlantic Ocean, and the search for new routes. Read more on Wikipedia

Prince Henry the Navigator was a Portuguese prince who was the son of King John I of Portugal and Philippa of Lancaster. He is best known for his sponsorship of the Portuguese explorations along the West African coast and for the discovery of the Azores, Madeira, and Cape Verde.

Page views of Prince Henry the Navigators by language

Among explorers, Prince Henry the Navigator ranks 14 out of 405. Before him are James Cook, Roald Amundsen, Ibn Battuta, Zheng He, Francis Drake, and Francisco Pizarro. After him are Jacques Cartier, Fridtjof Nansen, Erik the Red, David Livingstone, Jacques Cousteau, and Xuanzang.

Among people born in 1394, Prince Henry the Navigator ranks 2. Before him is Johannes Gutenberg. After him are Ulugh Beg, Charles, Duke of Orléans, James I of Scotland, Cymburgis of Masovia, Philippa of England, Ikkyū, Ashikaga Yoshinori, and Antonio Beccadelli. Among people deceased in 1460, Prince Henry the Navigator ranks 1. After him are Pachacuti, Richard of York, 3rd Duke of York, James II of Scotland, Gilles Binchois, John IV of Trebizond, Albert III, Duke of Bavaria, Guarino da Verona, Ma Huan, Michael Szilágyi, Gonçalo Velho Cabral, and Niccolò Antonio Colantonio.