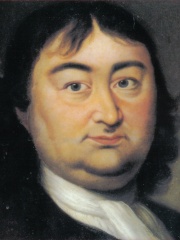 Vitus Jonassen Bering (baptised 5 August 1681 – 19 December 1741), also known as Ivan Ivanovich Bering, was a Danish cartographer and explorer in Russian service, and an officer in the Russian Navy. He is known as a leader of two Russian expeditions, namely the First Kamchatka Expedition and the Great Northern Expedition, exploring the north-eastern coast of the Asian continent and from there the western coast on the North American continent. Read more on Wikipedia

Vitus Bering was a Danish explorer who discovered Alaska.

Among people born in 1681, Vitus Bering ranks 2. Before him is Georg Philipp Telemann. After him are Johann Mattheson, Hedvig Sophia of Sweden, Theophan Prokopovich, Ernest Frederick I, Duke of Saxe-Hildburghausen, and Henrietta Godolphin, 2nd Duchess of Marlborough. Among people deceased in 1741, Vitus Bering ranks 2. Before him is Antonio Vivaldi. After him are Ulrika Eleonora, Queen of Sweden, Elisabeth Therese of Lorraine, Johann Joseph Fux, Archduchess Maria Elisabeth of Austria, Jethro Tull, Pauline Félicité de Mailly-Nesle, Jean-Baptiste Rousseau, Wirich Philipp von Daun, Victor Amadeus I, Prince of Carignano, and Anna Maria Franziska of Saxe-Lauenburg.

Among EXPLORERS In Denmark