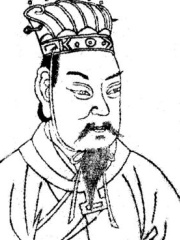 Cao Cao (pronunciation ; [tsʰǎu tsʰáu]; Chinese: 曹操; c.  155 – 15 March 220), courtesy name Mengde (Chinese: 孟德), was a Chinese warlord, statesman and poet. He was the penultimate grand chancellor of the Eastern Han dynasty who rose to great power in the final years of the dynasty. As one of the central figures of the Three Kingdoms period, he laid the foundations for what was to become the state of Cao Wei and ultimately the Jin dynasty, and was posthumously honoured as "Emperor Wu of Wei" although he never was an emperor during his lifetime. Read more on Wikipedia

Cao Cao was a warlord who controlled the north of China during the late Eastern Han dynasty. He is best known for his role in the decline of the dynasty, which eventually led to the fall of the dynasty and the establishment of the Three Kingdoms period.

Among military personnels, Cao Cao ranks 15 out of 1,466. Before him are Charles Martel, Adolf Eichmann, William Wallace, Chiang Kai-shek, Themistocles, and Khalid ibn al-Walid. After him are Heinz Guderian, Erich von Manstein, Prince Eugene of Savoy, Pyrrhus of Epirus, Ptolemy I Soter, and Wilhelm Keitel.