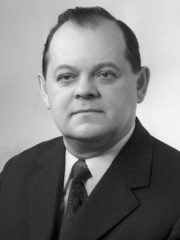 Boris Yevdokimovich Shcherbina (Ukrainian: Борис Євдокимович Щербина, romanized: Borys Yevdokymovych Shcherbyna, Russian: Борис Евдокимович Щербина; 5 October 1919 – 22 August 1990) was a Ukrainian Soviet politician who served as a Deputy Chairman of the Council of Ministers of the Soviet Union from 1984 to 1989. Read more on Wikipedia

Boris Shcherbina was a Soviet politician. He was the head of the Soviet Union's NKVD, which was the predecessor to the KGB. He was most famous for his role in the Great Purge.

Among politicians, Boris Shcherbina ranks 2,608 out of 15,577. Before him are Empress Meishō, Calchas, Lennart Meri, Neferefre, César Gaviria, and Ivan II of Moscow. After him are Auguste Beernaert, Constantine III, Fulvia, Anna of Tyrol, Princess Cecilie of Greece and Denmark, and Alexandre Colonna-Walewski.