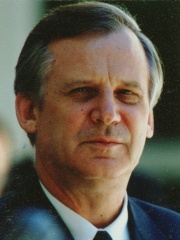 Nikolai Ivanovich Ryzhkov (Ukrainian: Микола Іванович Рижков; Russian: Николай Иванович Рыжков, romanized: Nikolaj Ivanovič Ryžkov; born 28 September 1929) is a former Soviet official who became a Russian politician following the dissolution of the Soviet Union. He served as the last Chairman of the Council of Ministers (the post was abolished and replaced by that of Prime Minister in 1991). Responsible for the cultural and economic administration of the Soviet Union during the late Gorbachev Era, Ryzhkov was succeeded as premier by Valentin Pavlov in 1991. Read more on Wikipedia

Nikolai Ryzhkov was a Soviet politician who served as the Chairman of the Council of Ministers from 1985 to 1990. He was also the last head of state of the Soviet Union.

Among politicians, Nikolai Ryzhkov ranks 3,966 out of 15,710. Before him are Michael Shishman of Bulgaria, Masamune, Sigurd II of Norway, Theramenes, Radagaisus, and Clodia Pulchra. After him are Louis, Count of Évreux, Otto Georg Thierack, Casimir I the Restorer, Gesalec, Lady Mary Victoria Douglas-Hamilton, and Hans Modrow.