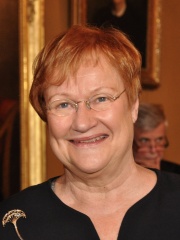 Tarja Kaarina Halonen (pronounced [ˈtɑrjɑ ˈkɑːrinɑ ˈhɑlonen] (listen); born 24 December 1943) is a Finnish politician who served as the 11th president of Finland, and the first woman to hold the position, from 2000 to 2012. She first rose to prominence as a lawyer with the Central Organisation of Finnish Trade Unions (SAK), and as the Prime Minister's parliamentary secretary (1974–1975) and a member of the City Council of Helsinki (1977–1996). Halonen was a Social Democratic Party member of parliament from 1979 until her election to the presidency in 2000. Read more on Wikipedia

Tarja Halonen is most famous for being the first female president of Finland.

Among politicians, Tarja Halonen ranks 1,676 out of 15,710. Before her are Egon Krenz, Ptolemy VII Neos Philopator, Carlos I of Portugal, Abu Ayyub al-Ansari, Axel Oxenstierna, and Pleistarchus. After her are Kenan Evren, Mohammed V of Morocco, Emperor Suizei, Mátyás Rákosi, Sultan Cem, and Maria I of Portugal.