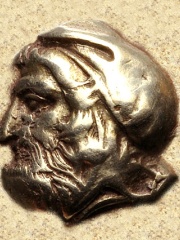 Cyrus the Younger (Old Persian: 𐎤𐎢𐎽𐎢𐏁 Kūruš), son of Darius II of Persia and Parysatis, was a Persian prince and general, Satrap of Lydia and Ionia from 408 to 401 BC. His birth date is unknown, but he died in 401 BC during a failed battle to oust his elder brother, Artaxerxes II, from the Persian throne. The history of Cyrus and of the retreat of his Greek mercenaries is told by Xenophon in his Anabasis. Another account, probably from Sophaenetus of Stymphalus, was used by Ephorus. Read more on Wikipedia

Since 2007, the English Wikipedia page of Cyrus the Younger has received more than 172,310 page views. His biography is available in 38 different languages on Wikipedia making him the 1,244th most popular politician.

Page views of Cyrus the Youngers by language

Among politicians, Cyrus the Younger ranks 1,238 out of 14,801. Before him are Eleftherios Venizelos, Ur-Nammu, Sariputta, Henry I, Duke of Guise, Ludwig III of Bavaria, and Mohammed V of Morocco. After him are Walther Funk, Akbar Hashemi Rafsanjani, Friedrich Ratzel, Zhao Ziyang, Warren G. Harding, and Albert Lebrun.

Others Deceased in 401 BC