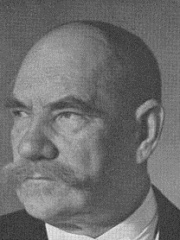 Pehr Evind Svinhufvud af Qvalstad (Finland Swedish: [ˈpæːr ˈeːvind ˈsviːnhʉːvʉd]; 15 December 1861 – 29 February 1944) was the third president of Finland from 1931 to 1937. Serving as a lawyer, judge, and politician in the Russian Grand Duchy of Finland, he played a major role in the movement for Finnish independence, he was one who presented the Declaration of Independence to the Parliament. In 1917–1918, Svinhufvud was the first Head of State of independent Finland, first as Chairman of the Senate and subsequently as Protector of State or Regent. Read more on Wikipedia

Pehr Evind Svinhufvud was the president of Finland from 1919 to 1925. He is most famous for his role in the Civil War of 1918, which started when the Finnish Parliament declared independence from Russia.

Among politicians, Pehr Evind Svinhufvud ranks 2,597 out of 15,577. Before him are Jules Ferry, Emperor Higashiyama, Sergei Witte, Stephen Tomašević of Bosnia, Gim Yu-sin, and Nikola Pašić. After him are Margaret III, Countess of Flanders, Maria Christina of Austria, Catherine Pavlovna of Russia, Ladislaus of Naples, Empress Meishō, and Calchas.