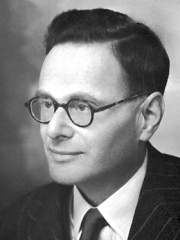 Sir Hans Adolf Krebs, FRS (, German: [hans ˈʔaːdɔlf ˈkʁeːps] (listen); 25 August 1900 – 22 November 1981) was a German-born British biologist, physician and biochemist. He was a pioneer scientist in the study of cellular respiration, a biochemical process in living cells that extracts energy from food and oxygen and makes it available to drive the processes of life. He is best known for his discoveries of two important sequences of chemical reactions that take place in the cells of humans and many other organisms, namely the citric acid cycle and the urea cycle. Read more on Wikipedia

Hans Adolf Krebs was a German scientist and professor of medicine. He is most famous for discovering the citric acid cycle, a series of chemical reactions that produce energy in cells.