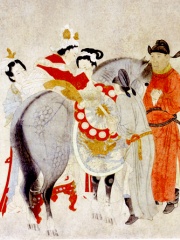 Yang Yuhuan (Chinese: 楊玉環; 26 June, 719 — 15 July 756), often known as Yang Guifei (楊貴妃, with Guifei being the highest rank for imperial consorts during her time), and known briefly by the Taoist nun name Taizhen (太真) was the beloved consort of Emperor Xuanzong of Tang during his later years. She is known as one of the Four Beauties of ancient China. During the An Lushan Rebellion, as Emperor Xuanzong and his cortege were fleeing from the capital Chang'an to Chengdu, the emperor's guards demanded that he put Yang to death because they blamed the rebellion on her cousin Yang Guozhong and the rest of her family. Read more on Wikipedia

Yang Guifei is most famous for being the consort of Emperor Xuanzong of Tang.

Among politicians, Yang Guifei ranks 1,198 out of 15,710. Before her are Pedro I of Brazil, John, King of Denmark, Frederick VII of Denmark, Alexander of Greece, Viktor Yanukovych, and Louis III of France. After her are Lazar of Serbia, Claudia Octavia, Zewditu, Jefferson Davis, Maria Christina, Duchess of Teschen, and Muhammad II of Khwarazm.