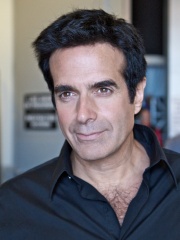 David Seth Kotkin (born September 16, 1956), known professionally as David Copperfield, is an American magician, described by Forbes as the most commercially successful magician in history.Copperfield's television specials have won 21 Emmy Awards and 38 nominations. Best known for his combination of storytelling and illusion, Copperfield's career of over 40 years has earned him 11 Guinness World Records, a star on the Hollywood Walk of Fame, a knighthood by the French government, and he has been named a Living Legend by the US Library of Congress.As of 2006, Copperfield has sold 33 million tickets and grossed over US$4 billion, more than any other solo entertainer in history. Read more on Wikipedia

Since 2007, the English Wikipedia page of David Copperfield has received more than 2,841,476 page views. His biography is available in 59 different languages on Wikipedia making him the 2nd most popular magician.

Among magicians, David Copperfield ranks 2 out of 10. Before him are Harry Houdini. After him are Uri Geller, Jean Eugène Robert-Houdin, James Randi, David Blaine, Criss Angel, Ricky Jay, Dynamo, and Derren Brown.

Among MAGICIANS In United States

Among magicians born in United States, David Copperfield ranks 1. After him are David Blaine (1973) and Criss Angel (1967).