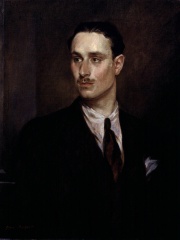 Sir Oswald Ernald Mosley, 6th Baronet (16 November 1896 – 3 December 1980) was a British politician who rose to fame in the 1920s as a Member of Parliament and later in the 1930s, having become disillusioned with mainstream politics, drifted towards fascism and became the founder and leader of the British Union of Fascists (BUF).After military service during the First World War, Mosley was one of the youngest members of parliament, representing Harrow from 1918 to 1924, first as a Conservative, then an independent, before joining the Labour Party. At the 1924 general election he stood in Birmingham Ladywood against the future prime minister, Neville Chamberlain, coming within 100 votes of defeating him. Mosley returned to Parliament as Labour MP for Smethwick at a by-election in 1926 and served as Chancellor of the Duchy of Lancaster in the Labour Government of 1929–31. Read more on Wikipedia

Oswald Mosley was a British fascist politician who founded the British Union of Fascists in 1932.

Among politicians, Oswald Mosley ranks 1,176 out of 15,710. Before him are Asa of Judah, Eric XIV of Sweden, Camille Desmoulins, Talaat Pasha, Jahangir, and Antoine of Navarre. After him are Shang Yang, Antiochus I Soter, Muawiya II, Marie Louise d’Orléans, F. W. de Klerk, and Turgut Özal.