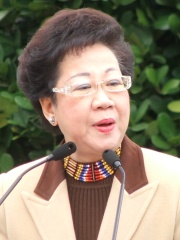 Annette Lu Hsiu-lien (Chinese: 呂秀蓮; pinyin: Lǚ Xiùlián; Pe̍h-ōe-jī: Lū Siù-liân; born 7 June 1944) is a Taiwanese politician. A feminist active in the tangwai movement, she joined the Democratic Progressive Party in 1990, and was elected to the Legislative Yuan in 1992. Subsequently, she served as Taoyuan County Magistrate between 1997 and 2000, and was the Vice President of the Republic of China from 2000 to 2008, under President Chen Shui-bian. Read more on Wikipedia

Since 2007, the English Wikipedia page of Annette Lu has received more than 103,689 page views. Her biography is available in 15 different languages on Wikipedia making her the 12,058th most popular politician.

Among politicians, Annette Lu ranks 11,971 out of 14,801. Before her are Stanley Sadie, Federico Errázuriz Echaurren, Hilla Limann, Scott Morrison, Muhammad az-Zanati, and Glappa of Bernicia. After her are Grantley Goulding, Mogens Lykketoft, Hédi Annabi, Ceolwulf of Wessex, George Fernandes, and Michael Häupl.