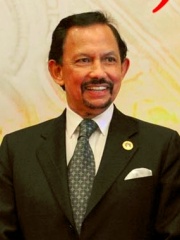 Hassanal Bolkiah (full name: Sultan Haji Hassanal Bolkiah Mu'izzaddin Waddaulah ibni Al-Marhum Sultan Haji Omar 'Ali Saifuddien Sa'adul Khairi Waddien Sultan and Yang di-Pertuan of Brunei Darussalam; born 15 July 1946) is the 29th and current Sultan and Yang di-Pertuan of Brunei, as well as the Prime Minister of Brunei, making him one of the last absolute monarchs. The eldest son of Sultan Omar Ali Saifuddien III and Raja Isteri (Queen) Pengiran Anak Damit, he succeeded to the throne as the Sultan of Brunei, following the abdication of his father on 5 October 1967. The sultan has been ranked among the wealthiest individuals in the world. Read more on Wikipedia

Since 2007, the English Wikipedia page of Hassanal Bolkiah has received more than 3,885,361 page views. His biography is available in 62 different languages on Wikipedia making him the 1,675th most popular politician.

Among politicians, Hassanal Bolkiah ranks 1,665 out of 14,801. Before him are Michael VI Bringas, William II, Prince of Orange, Jehoiakim, Maria Josepha of Bavaria, Empress Lü, and Bao Zheng. After him are Frederick Augustus I of Saxony, Şah Sultan, Stamford Raffles, Seonjo of Joseon, Emperor Huizong of Song, and Sancho I of Portugal.

Others born in Brunei

Among POLITICIANS In Brunei

Among politicians born in Brunei, Hassanal Bolkiah ranks 1. After him are Omar Ali Saifuddien III (1914).