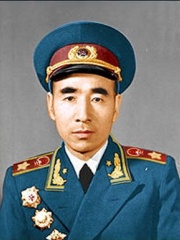 Lin Biao (Chinese: 林彪; December 5, 1907 – September 13, 1971) was a Marshal of the People's Republic of China who was pivotal in the Communist victory during the Chinese Rebellion of 1931 to 1949, especially in Northeast China from 1946 to 1949. Lin was the general who commanded the decisive Liaoshen and Pingjin Campaigns, in which he co-led the Manchurian Field Army to victory and led the People's Liberation Army into Beijing. He crossed the Yangtze River in 1949, decisively defeated the Kuomintang and took control of the coastal provinces in Southeast China. Read more on Wikipedia

Lin Biao was a major military leader of the People's Republic of China, who was also the Vice-Chairman of the Communist Party of China. He is best known for his role as the commander of the People's Liberation Army during the Cultural Revolution and for his death in 1971 when he allegedly attempted to escape to the Soviet Union.

Among politicians, Lin Biao ranks 1,559 out of 15,710. Before him are Gongmin of Goryeo, Archduchess Maria Anna of Austria, Djer, Bessus, Pharamond, and Jean-Marie Le Pen. After him are Yun Posun, Huni, Princess Isabella of Parma, Marie Walewska, Chester A. Arthur, and Porfirio Díaz.