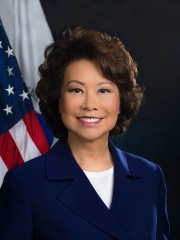 Elaine Lan Chao (born March 26, 1953) is an American executive and public servant who serves as the United States Secretary of Transportation, having assumed office on January 31, 2017. A member of the Republican Party, Chao was previously Secretary of Labor under President George W. Bush from 2001 to 2009. Born in Taipei, Taiwan to Chinese parents who had left mainland China following the Chinese Civil War, Chao immigrated to the United States at age 8. Read more on Wikipedia

Since 2007, the English Wikipedia page of Elaine Chao has received more than 4,231,828 page views. Her biography is available in 31 different languages on Wikipedia making her the 248th most popular economist.

Among ECONOMISTS In Taiwan