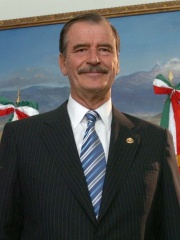 Vicente Fox Quesada (American Spanish: [biˈsente ˈfoks keˈsaða]; born 2 July 1942) is a Mexican businessman and politician who served as the 62nd President of Mexico from 1 December 2000 to 30 November 2006. Campaigning as a right-wing populist, Fox ran for and was elected president on the National Action Party (PAN) ticket, becoming the first president not from the Institutional Revolutionary Party (PRI) since 1929. He is currently the co-president of the Centrist Democrat International, an international organization of center-right political parties.Fox was elected President of Mexico in the 2000 presidential election, a historically significant election since it made him the first president elected from an opposition party since the election of Francisco I. Madero in 1911. Read more on Wikipedia

Vicente Fox is most famous for being the first president of Mexico who was not a member of the Institutional Revolutionary Party (PRI).

Among politicians, Vicente Fox ranks 2,388 out of 15,710. Before him are Stephen II of Hungary, Cao Fang, Guo Jia, Cevdet Sunay, Joseph Babinski, and William I of Sicily. After him are Theophano, Lennart Meri, Antonín Novotný, Crown Prince Sado, Anastasia Romanovna, and Attalus III.