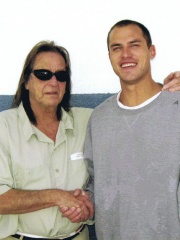 George Jacob Jung (August 6, 1942 – May 5, 2021), nicknamed Boston George and El Americano, was an American drug trafficker and smuggler who was a major figure in the cocaine trade in the United States in the 1970s and early 1980s. Jung and his partner Carlos Lehder smuggled cocaine into the United States for the Colombian Medellín Cartel. Jung was sentenced to 70 years in prison in 1994 on conspiracy charges, but was released in 2014. Read more on Wikipedia

Since 2007, the English Wikipedia page of George Jung has received more than 10,151,926 page views. His biography is available in 19 different languages on Wikipedia. George Jung is the 55th most popular extremist (up from 59th in 2019), the 1,182nd most popular biography from United States (up from 1,434th in 2019) and the 21st most popular American Extremist.

George Jung is most famous for being a drug smuggler in the 1970s. He was convicted and sentenced to 70 years in prison, but was released after serving 20 years.