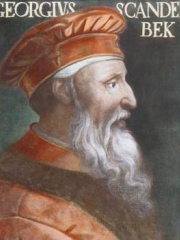 Gjergj Kastrioti (Latin: Georgius Castriota; Italian: Giorgio Castriota; 1405 – 17 January 1468), commonly known as Skanderbeg (Albanian: Skënderbeu or Skënderbej, from Ottoman Turkish: اسکندر بگ, romanized: İskender Bey; Italian: Scanderbeg), was an Albanian feudal lord and military commander who led a rebellion against the Ottoman Empire in what is today Albania, North Macedonia, Greece, Kosovo, Montenegro and Serbia. A member of the noble Kastrioti family, he was sent as a hostage to the Ottoman court. He was educated there and entered the service of the Ottoman sultan for the next twenty years. Read more on Wikipedia

Skanderbeg was a 15th century Albanian who led a rebellion against the Ottoman Empire. He was successful in defending Albania from the Ottomans for about 25 years.

Page views of Skanderbegs by language

Among politicians, Skanderbeg ranks 134 out of 15,710. Before him are Alfred the Great, Gustavus Adolphus of Sweden, Hermann Göring, Amenhotep III, Ferdinand I, Holy Roman Emperor, and Mehmed III. After him are Maximilian I, Holy Roman Emperor, Deng Xiaoping, Sun Yat-sen, Simón Bolívar, Richard Nixon, and Bayezid I.