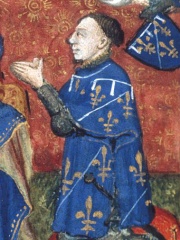 Jean d'Orléans, Count of Dunois (23 November 1402 – 24 November 1468), known as the "Bastard of Orléans" (French: bâtard d'Orléans) or simply Jean de Dunois, was a French military leader during the Hundred Years' War who participated in military campaigns with Joan of Arc. His nickname, the "Bastard of Orléans", was a mark of his high status, since it acknowledged him as a first cousin to the king and acting head of a cadet branch of the royal family during his half-brother's captivity. Read more on Wikipedia

Jean de Dunois was a French knight and the son of Charles VII. He led the French army to victory in the Battle of Castillon, which ended the Hundred Years War.

Among politicians, Jean de Dunois ranks 3,288 out of 15,577. Before him are Ferdinand II of Naples, Emperor Ai of Tang, Tukulti-Ninurta I, Otto I, Duke of Bavaria, Moinuddin Chishti, and Louis-Jules Trochu. After him are Ernest Augustus, Duke of Brunswick, Apepi, Maurice, Elector of Saxony, Kocel, Zwentibold, and Henry VI, Count of Luxembourg.

Among people born in 1402, Jean de Dunois ranks 2. Before him is Eleanor of Aragon, Queen of Portugal. After him are Nezahualcoyotl, Isabel of Barcelos, and Ferdinand the Holy Prince. Among people deceased in 1468, Jean de Dunois ranks 4. Before him are Johannes Gutenberg, Skanderbeg, and Sejo of Joseon. After him are Abu'l-Khayr Khan, Juana Enríquez, Sigismondo Pandolfo Malatesta, Bianca Maria Visconti, Alfonso, Prince of Asturias, Francesco Squarcione, and Zara Yaqob.