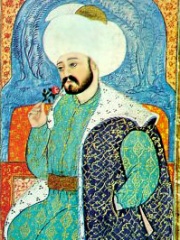 Mehmed I (1389 – 26 May 1421), also known as Mehmed Çelebi (Ottoman Turkish: چلبی محمد‎, "the noble-born") or Kirişçi (Greek: Κυριτζής, romanized: Kyritzis, "lord's son"), was the Ottoman sultan from 1413 to 1421. The fourth son of Sultan Bayezid I and Devlet Hatun, he fought with his brothers over control of the Ottoman realm in the Ottoman Interregnum (1402–1413). Starting from the province of Rûm he managed to bring first Anatolia and then the European territories (Rumelia) under his control, reuniting the Ottoman state by 1413, and ruling it until his death in 1421. Read more on Wikipedia

Since 2007, the English Wikipedia page of Mehmed I has received more than 623,985 page views. His biography is available in 65 different languages on Wikipedia making him the 176th most popular politician.

Page views of Mehmed IS by language

Among politicians, Mehmed I ranks 174 out of 14,801. Before him are Henry III of France, Charles X of France, Silvio Berlusconi, Domitian, Demosthenes, and Ivar the Boneless. After him are David Ben-Gurion, Titus, Christina, Queen of Sweden, Joanna of Castile, Al Gore, and Rudolf Hess.