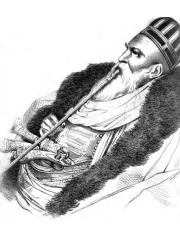 Ali Pasha of Ioannina (1740 – 24 January 1822), was an Albanian ruler who served as pasha of a large part of western Rumelia, the Ottoman Empire's European territories, which was referred to as the Pashalik of Yanina. His court was in Ioannina, and the territory he governed incorporated central and southern Albania, most of Epirus and the western parts of Thessaly and Greek Macedonia. Ali had three sons: Muhtar Pasha, who served in the 1809 war against the Russians, Veli Pasha, who became Pasha of the Morea Eyalet and Salih Pasha, governor of Vlorë.Ali first appears in historical accounts as the leader of a band of brigands who became involved in many confrontations with Ottoman state officials in Albania and Epirus. Read more on Wikipedia

Ali Pasha of Ioannina was a powerful ruler of the Ottoman province of Ioannina. He was most famous for his battles with the Greek rebels, who were trying to gain independence from the Ottoman Empire.

Page views of Ali Pasha of Ioanninas by language

Among politicians, Ali Pasha of Ioannina ranks 940 out of 15,577. Before him are Benjamin Disraeli, Kurt Waldheim, Gustav IV Adolf of Sweden, Park Geun-hye, Ptolemy IV Philopator, and Balbinus. After him are Alberto Fujimori, Archduchess Marie Valerie of Austria, Vasili III of Russia, Princess Ludovika of Bavaria, Halime Sultan, and Lysimachus.