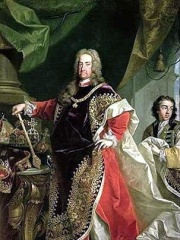 Charles VI (German: Karl; Latin: Carolus; 1 October 1685 – 20 October 1740) was Holy Roman Emperor and ruler of the Austrian Habsburg monarchy from 1711 until his death, succeeding his elder brother, Joseph I. He unsuccessfully claimed the throne of Spain following the death of his relative, Charles II. In 1708, he married Elisabeth Christine of Brunswick-Wolfenbüttel, by whom he had his four children: Leopold Johann (who died in infancy), Maria Theresa (the last direct Habsburg sovereign), Maria Anna (Governess of the Austrian Netherlands), and Maria Amalia (who also died in infancy). Four years before the birth of Maria Theresa, faced with his lack of male heirs, Charles provided for a male-line succession failure with the Pragmatic Sanction of 1713. The Emperor favoured his own daughters over those of his elder brother and predecessor, Joseph I, in the succession, ignoring the decree he had signed during the reign of his father, Leopold I. Charles sought the other European powers' approval. Read more on Wikipedia

Charles VI was Holy Roman Emperor from 1711 to 1740. He is most famous for being the ruler of the Holy Roman Empire during the War of the Austrian Succession.

Among politicians, Charles VI, Holy Roman Emperor ranks 158 out of 15,577. Before him are Lech Wałęsa, Maximilien Robespierre, Paul von Hindenburg, Gustavus Adolphus of Sweden, Alfred the Great, and Louis IX of France. After him are Ivar the Boneless, Darius III, Mehmed I, William I, German Emperor, Skanderbeg, and Rodrigo Duterte.