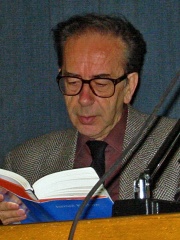 Ismail Kadare (Albanian pronunciation: [ismaˈil kadaˈɾe]; spelled Ismaïl Kadaré in French; born 28 January 1936) is an Albanian novelist, poet, essayist, screenwriter, and playwright. He is a leading international literary figure and intellectual. He focused on poetry until the publication of his first novel, The General of the Dead Army, which made him famous internationally.In 1992 Kadare was awarded the Prix mondial Cino Del Duca; in 1998, the Herder Prize; in 2005, the inaugural Man Booker International Prize; in 2009, the Prince of Asturias Award of Arts; and in 2015, the Jerusalem Prize. Read more on Wikipedia

Ismail Kadare is most famous for his novels. He has written many novels, but the most famous are The General of the Dead Army, The Palace of Dreams, and The Pyramid.

Among WRITERS In Albania