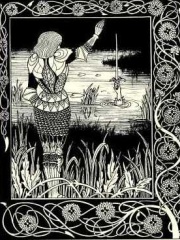 Sir Thomas Malory (c. 1415 – 14 March 1471) was an English writer, the author or compiler of Le Morte d'Arthur, the classic English-language chronicle of the Arthurian legend, published by William Caxton in 1485. Malory's identity has never been confirmed, but the likeliest candidate is Sir Thomas Malory of Newbold Revel in Warwickshire. Read more on Wikipedia

Thomas Malory is most famous for writing the Morte d'Arthur, a compilation of tales about King Arthur and his knights.

Among people born in 1405, Thomas Malory ranks 5. Before him are Skanderbeg, Pope Pius II, Gilles de Rais, and John II of Castile. After him are Sophia of Halshany, Ulugh Muhammad, and Maria of Trebizond. Among people deceased in 1471, Thomas Malory ranks 7. Before him are Henry VI of England, Pope Paul II, Thomas à Kempis, Edward of Westminster, Prince of Wales, George of Poděbrady, and Isabella of Portugal, Duchess of Burgundy. After him are Richard Neville, 16th Earl of Warwick, Frederick II, Elector of Brandenburg, João Gonçalves Zarco, Emperor Go-Hanazono, Borso d'Este, Duke of Ferrara, and Antonio Beccadelli.