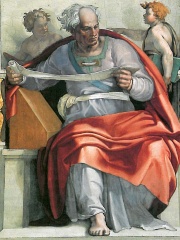 Joel (; Hebrew: יוֹאֵל – Yōʾēl; Greek: Ἰωήλ – Iōḗl; Syriac: ܝܘܐܝܠ – Yu'il) was a prophet of ancient Israel, the second of the twelve minor prophets and according to the book itself the author of the Book of Joel. He is mentioned by name only once in the Hebrew Bible, in the introduction to that book, as the son of Pethuel (Joel 1:1). The name Joel combines the covenant name of God, YHWH (or Yahweh), and El (god), and has been translated as "one to whom YHWH is God," that is, a worshiper of YHWH.Some commentators suggest that Joel lived in the 9th century BCE, whereas others assign him to the 5th or 4th century BCE. The dating of his book is similarly debated; there are no mentions of kings that might help locate it in time. Read more on Wikipedia

Since 2007, the English Wikipedia page of Joel has received more than 184,328 page views. His biography is available in 34 different languages on Wikipedia. Joel is the 388th most popular religious figure (down from 371st in 2019), the 55th most popular biography from Israel and the 30th most popular Religious Figure.

Joel is most famous for his song "Piano Man."

Page views of Joels by language

Among religious figures, Joel ranks 388 out of 2,238. Before him are Pope John XVII, Clement of Ohrid, Talhah, James the Less, Dietrich Bonhoeffer, and Pope Lando. After him are Pope Stephen III, Muhammad al-Baqir, Nehemiah, Denis, Pope Boniface III, and Pope Conon.

Others Deceased in 301 BC