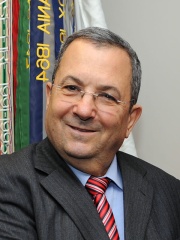 Ehud Barak (Hebrew: אֵהוּד בָּרָק‎ , born Ehud Brog; 12 February 1942) is an Israeli general and politician who served as the tenth prime minister from 1999 to 2001. He was leader of the Labor Party until January 2011. He previously held the posts of defense minister and deputy prime minister under Ehud Olmert and then in Benjamin Netanyahu's second government from 2007 to 2013. Read more on Wikipedia

Ehud Barak was the Prime Minister of Israel from 1999 to 2001 and again from 2007 to 2009. He is also a retired Israeli military officer who served as Chief of Staff, Minister of Defense, and Deputy Prime Minister.

Among politicians, Ehud Barak ranks 1,495 out of 15,577. Before him are Gaston, Duke of Orléans, Musaylimah, René of Anjou, Lü Buwei, Carus, and Constantius III. After him are Louis II, Prince of Monaco, Mentuhotep II, Numerian, Christian V of Denmark, Elisa Bonaparte, and Theodore I Laskaris.