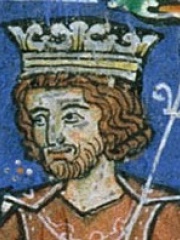 Amalric or Amaury I (Latin: Amalricus; French: Amaury; 1136 – 11 July 1174) was King of Jerusalem from 1163, and Count of Jaffa and Ascalon before his accession. He was the second son of Melisende and Fulk of Jerusalem, and succeeded his older brother Baldwin III. During his reign, Jerusalem became more closely allied with the Byzantine Empire, and the two states launched an unsuccessful invasion of Egypt. He was the father of three future rulers of Jerusalem, Sibylla, Baldwin IV, and Isabella I. Older scholarship mistook the two names Amalric and Aimery as variant spellings of the same name, so these historians erroneously added numbers, making Amalric to be Amalric I (1163–74) and King Aimery (1197–1205) to be "Amalric II". Read more on Wikipedia

Page views of Amalric of Jerusalems by language

Among politicians, Amalric of Jerusalem ranks 1,296 out of 15,577. Before him are Michelle Bachelet, Nitocris, Jean-Marie Le Pen, Güyük Khan, Christian VIII of Denmark, and Hussein bin Ali, Sharif of Mecca. After him are Michel Temer, Marwan II, Frederick II of Denmark, Grand Duke Konstantin Pavlovich of Russia, Johann Friedrich Struensee, and Gyula Andrássy.