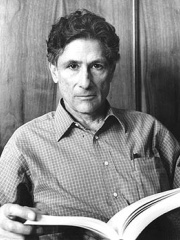 Edward Wadie Said (; Arabic: إدوارد وديع سعيد, romanized: Idwārd Wadīʿ Saʿīd, [wædiːʕ sæʕiːd]; 1 November 1935 – 24 September 2003) was a Palestinian-American professor of literature at Columbia University, a public intellectual, and a founder of the academic field of postcolonial studies. Born in Mandatory Palestine, he was a citizen of the United States by way of his father, a U.S. Army veteran. Educated in the Western canon at British and American schools, Said applied his education and bi-cultural perspective to illuminating the gaps of cultural and political understanding between the Western world and the Eastern world, especially about the Israeli–Palestinian conflict in the Middle East; his principal influences were Antonio Gramsci, Frantz Fanon, Aimé Césaire, Michel Foucault, and Theodor Adorno.As a cultural critic, Said is known for the book Orientalism (1978), a critique of the cultural representations that are the bases of Orientalism—how the Western world perceives the Orient. Read more on Wikipedia

Edward is most famous for his work on the theory of relativity.

Among WRITERS In Israel