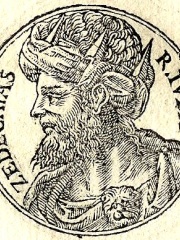 Zedekiah (), was the 20th and last king of Judah before the destruction of the kingdom by King Nebuchadnezzar II of Babylon. His birth name was Mattaniah/Mattanyahu (Hebrew: מַתַּנְיָהוּ, Mattanyāhū, "Gift of God"; Greek: Μαθθανιας; Latin: Matthanias). After the siege of Jerusalem in 597 BC, Nebuchadnezzar II deposed King Jeconiah and installed Mattanyahu (his uncle) as king of Judah, changing his name to Zedekiah (2 Kings 24:17). Read more on Wikipedia

Since 2007, the English Wikipedia page of Zedekiah has received more than 800,991 page views. His biography is available in 40 different languages on Wikipedia. Zedekiah is the 1,145th most popular politician (down from 1,102nd in 2019), the 57th most popular biography from Israel (up from 60th in 2019) and the 16th most popular Israeli Politician.

Zedekiah is most famous for being the last king of Judah, who was overthrown by Nebuchadnezzar II.

Page views of Zedekiahs by language

Among politicians, Zedekiah ranks 1,145 out of 15,577. Before him are Mahfiruz Hatun, Dick Cheney, Margaret of Anjou, Jahangir, Abdullah Gül, and Artaxerxes III. After him are William Jennings Bryan, Robert I of France, Nikephoros III Botaneiates, Ibrahim Pasha of Egypt, Frederick V of Denmark, and Manasseh of Judah.

Others Deceased in 550 BC