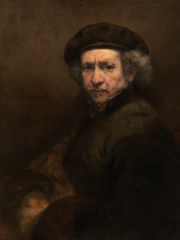 Rembrandt Harmenszoon van Rijn (, Dutch: [ˈrɛmbrɑnt ˈɦɑrmə(n)ˌsoːɱ vɑn ˈrɛin] (listen); 15 July 1606 – 4 October 1669), usually simply known as Rembrandt, was a Dutch Golden Age painter, printmaker and draughtsman. An innovative and prolific master in three media, he is generally considered one of the greatest visual artists in the history of art and the most important in Dutch art history. Unlike most Dutch masters of the 17th century, Rembrandt's works depict a wide range of style and subject matter, from portraits and self-portraits to landscapes, genre scenes, allegorical and historical scenes, and biblical and mythological themes as well as animal studies. Read more on Wikipedia

Page views of Rembrandts by language

Among painters, Rembrandt ranks 5 out of 1,428. Before him are Michelangelo, Vincent van Gogh, Pablo Picasso, and Raphael. After him are Salvador Dalí, Albrecht Dürer, Frida Kahlo, Claude Monet, Peter Paul Rubens, Caravaggio, and Edvard Munch.