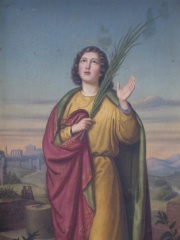 Pancras (Latin: Sanctus Pancratius) was a Roman citizen who converted to Christianity and was beheaded for his faith at the age of fourteen, around the year 304. His name is Greek (Παγκράτιος) and means "the one that holds everything". From an early stage, Pancras was venerated together with Nereus and Achilleus in a shared feast day and Mass formula on 12 May. Read more on Wikipedia

The Pantheon is a building in Rome, Italy, which was originally built as a temple to all the gods of Ancient Rome. It is the best preserved of all Roman buildings.

Page views of Pancras of Romes by language

Among religious figures, Pancras of Rome ranks 619 out of 2,238. Before him are Baal Shem Tov, Óscar Romero, Chaitanya Mahaprabhu, Célestin Freinet, Dōgen, and Patriarch Kirill of Moscow. After him are Hans Küng, Pope Leo V, Mahavatar Babaji, Eli, Victor of Aveyron, and Athenagoras I of Constantinople.

Among people born in 289, Pancras of Rome ranks 1. After him are Fausta, Euphemia, and Julius Constantius. Among people deceased in 304, Pancras of Rome ranks 8. Before him are Philomena, Anastasia of Sirmium, Vincent of Saragossa, Saint Florian, Christina of Bolsena, and Pope Marcellinus. After him are Eulalia of Mérida, Euphemia, Juliana of Nicomedia, Saint Afra, and Emerentiana.