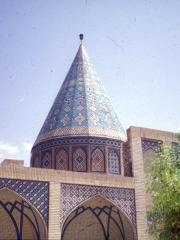 Abū Luʾluʾa Fīrūz (Arabic: أبو لؤلؤة فيروز; from Middle Persian: Pērōz), also known as Bābā Shujāʿ al-Dīn (بابا شجاع الدين), was a Sassanid Persian slave known for having assassinated Umar ibn al-Khattab (r. 634–644), the second Islamic caliph, in November 644. After having been captured in battle during the Arab-Muslim conquest of Persia, Abu Lu'lu'a was brought to Medina, the then-capital of the Rashidun Caliphate, which was normally off-limits to non-Arab captives. Read more on Wikipedia

Piruz Nahavandi is most famous for being the founder of the Safavid Dynasty.

Among religious figures, Piruz Nahavandi ranks 654 out of 2,238. Before him are Muhammad ibn al-Hanafiyyah, Nachman of Breslov, Abu Dhar al-Ghifari, Philemon, Hillel the Elder, and Olaus Magnus. After him are Jean-Baptiste de La Salle, Zephaniah, Theodora, Aloysius Stepinac, Mordecai, and Eulalia of Mérida.

Among people born in 700, Piruz Nahavandi ranks 8. Before him are Pope Paul I, Pope Gregory III, Pope-elect Stephen, Anastasios II, Philippikos Bardanes, and Dihya. After him are Theodosius III, Wahshi ibn Harb, Ibrahim ibn al-Walid, Tiberius III, Abdullah ibn Saba', and Paolo Lucio Anafesto. Among people deceased in 644, Piruz Nahavandi ranks 2. Before him is Umar. After him is Paulinus of York.