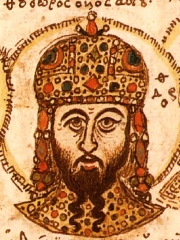 Theodore II Doukas Laskaris or Ducas Lascaris (Greek: Θεόδωρος Δούκας Λάσκαρις, romanized: Theodōros Doukas Laskaris; 1221/1222 – August 18, 1258) was Emperor of Nicaea from 1254 to 1258. He was the only child of Emperor John III Doukas Vatatzes and Empress Irene Laskarina. His mother was the eldest daughter of Theodore I Laskaris who had established the Empire of Nicaea as a successor state to the Byzantine Empire in Asia Minor, after the crusaders captured the Byzantine capital, Constantinople, during the Fourth Crusade in 1204. Read more on Wikipedia

Since 2007, the English Wikipedia page of Theodore II Laskaris has received more than 88,911 page views. His biography is available in 39 different languages on Wikipedia making him the 1,365th most popular politician.

Among politicians, Theodore II Laskaris ranks 1,359 out of 14,801. Before him are Casimir III the Great, Athaulf, Piero di Cosimo de' Medici, Uesugi Kenshin, Léon Blum, and John McCain. After him are Asa of Judah, Louis the Child, Octavia the Younger, Lon Nol, Bernie Sanders, and Lucullus.